Open-channel hydraulic theory for flow of an inviscid fluid in down a channel of changing slope and width yields a longitudinal velocity profile that matches measured velocities of the August 7, 1980, pyroclastic flow at Mount St. Helens. The model is useful for prediction of zones of erosion, deposition, and hazards. It requires only topographic data, estimates of volumetric flow rate, and a Manning coefficient appropriate for the channel.

Figure 1. Topography of north side of Mount St. Helens and pumice deposits (shaded) from the August 7, 1980 pyroclastic flow (after Kuntz et al., 1990). Dashed line indicates path of flow front; transverse bars are positions used by Hoblitt (1986) to calculate velocities over numbered reaches. For clarity only 200 ft (61 m) contours are shown. Flow from crater was not visible until it had traveled 1.3 km to reach 1.

The August 7, 1980, eruption at Mount St. Helens produced one of the best documented pyroclastic flows to date (Rowley et al., 1981; Hoblitt, 1986; Kuntz et al., 1990). Flow-front velocities varied by a factor of 6 along a path including the steep, channelized “Stair Steps” and the unchannelized Pumice Plain (Figs. 1, 2). Sustained production of a cloud of elutriated ash occurred just below a sharp decrease in slope at the entrance to the Pumice Plain. Erosion was documented in the steep part of the channel. These observations provide a unique data set against which models of pyroclastic flows might be tested. To date, models proposed have focused on relations between the flow head and body (Hoblitt, 1986; Huppert et al. 1986), or on flow rheology (Wilson and Head, 1981; McEwen and Malin, 1989). In this paper we have taken a new approach by applying hydraulic theory to demonstrate that channel geometry, not rheology, most strongly influenced the phenomena observed during the August 7 pyroclastic flow.

We use steady open-channel hydraulic theory as summarized in the next section. Two of the simplifying assumptions need special emphasis because they are relevant to current concepts in volcanology. One assumption is that the fluid is inviscid and that material properties, such as particle concentration and viscosity, do not significantly influence the velocity variations in the channel. The second assumption is that observed flow-front velocity is approximately equivalent to a mean flow velocity calculated for steady conditions developed behind the flow front.
Conditions within volcanic flows, such as velocity, particle concentration, and mixture viscosity, have not been directly measured and must be inferred from interpretation of erosion surfaces or sedimentary deposits. Use of the term “pyroclastic flow” for the August 7 eruption implies that the material is perceived to be a highly concentrated particulate system in which grain interactions are significant. However, relative volume fractions of solids and gas in these complex mixtures can vary with time or distance (Fisher, 1983). Particle concentrations may range from those characteristic of granular flow (as might be described by constitutive relations of Savage, 1979) to those characteristic of a dilute dusty gas (as might be described by pseudo gas theory; Wallace, 1969). The analyses of the August 7 flow presented by Wilson and Head (1981) and McEwen and Malin (1989) assume characteristics nearer the granular-flow end member. 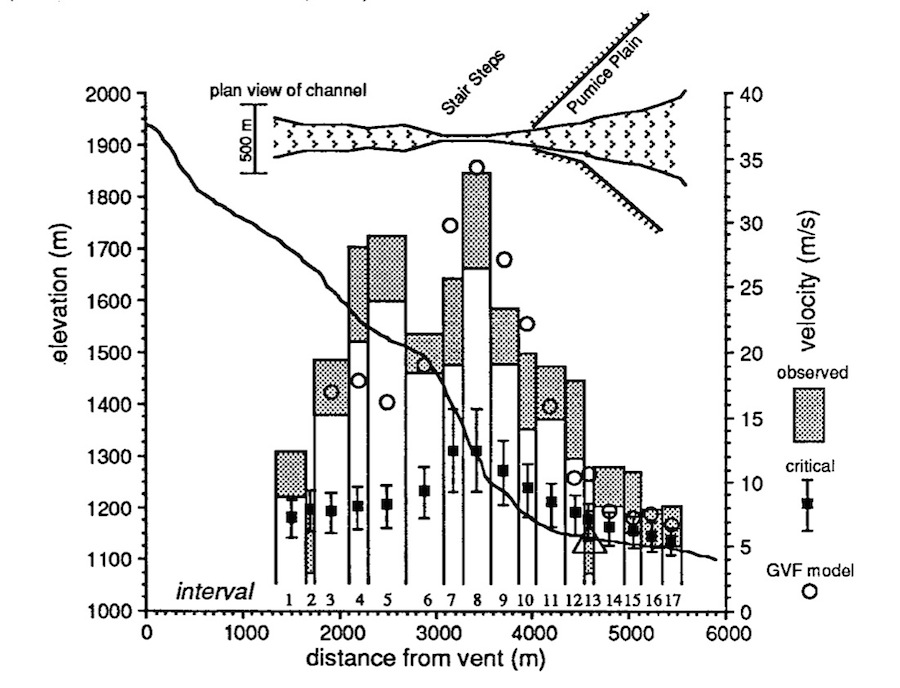 Viscosity is negligible in open-channel flow when (Thompson, 1972):

where ∆d/∆x is the gradient of the flow depth, F=u/√gd is the Froude number, and Re is the Reynolds number, Re = hu/n (u is mean velocity and n is kinematic viscosity). Velocity and flow depth are coupled through the continuity equation. For observed velocities from 5 to 30 m/s and estimated depths from 3 to 10 m (Table 1), the Reynolds number is 103 to 105 (for plausible kinematic viscosities from 10-4 to 10-3 m2/s (Sparks, 1976; Wilson and Head, 1981). For F 1 to 5, the criterion for the inviscid flow approximation to be valid is then ∆d /∆x >> 10-3 to 10-5. Within the limits of the model, we find that flow depth variations were from 1 to 10 m depth per 100 m distance, so that ∆d /∆x is typically 10-2 to 10-1 (except in a few reaches where the calculated depth change is less than 1 m). Therefore, the inviscid requirement is generally satisfied, as would be expected from the large Reynolds numbers. 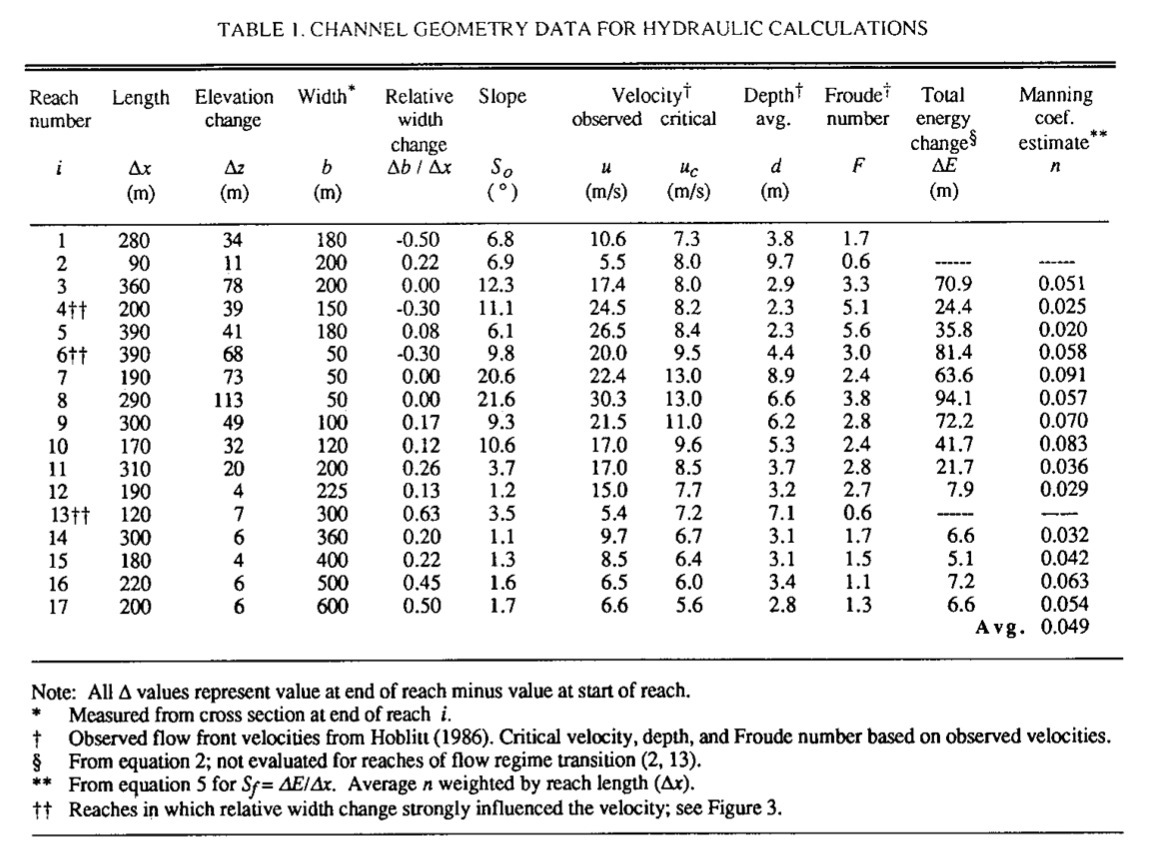 The flow is assumed to have uniform density and to be steady, incompressible, isothermal, and confined to a rectangular channel. The hydraulic equations of continuity and energy are

where Q is volumetric flow rate, u is mean flow velocity, b is channel width, d is flow depth measured normal to the channel bottom, E is total mechanical energy, z is elevation of the channel bottom relative to an arbitrary datum, y is vertical component of depth, and g is acceleration due to gravity (Chow, 1959). For a given discharge, two flow depths (and velocities) satisfy equation 3. These correspond to two flow regimes characterized by the Froude number, F = u /R(gd). For F > 1, flow is supercritical, and for F < 1, flow is subcritical. Critical conditions occur at F = 1, with a critical velocity,

Transitions from supercritical to subcritical flow are spatially discontinuous, and the two flow regimes are separated by a hydraulic jump. In nature, hydraulic jumps can occur as standing waves in rivers (Kieffer, 1985), lava flows (Kieffer, 1989), turbidity currents (Komar, 1971), and subaqueous debris flows (Weirich, 1989).
In reaches where lateral and vertical accelerations are small and no hydraulic jumps are present, flow conditions are approximated by equations of gradually varied flow. Changes in flow depth are evaluated by taking the derivative of equation 3 with respect to downstream direction (x) and substituting for velocity from equation 2

where So = ∂z/∂x is the channel slope, and Sf = ∂E/∂x is the energy gradient. The latter is given by the loss in energy, ∆E, evaluated from equation 3, between two sections separated by a distance ∆x. The Sf term is also equivalent to the fictitious slope, S, that satisfies the Manning formula for flow of uniform velocity in a channel of the same hydraulic radius (Chow, 1959),

where n is the empirical Manning coefficient, and R is the hydraulic radius (ratio of cross-section area to wetted perimeter). At a given flow rate, the regime (supercritical or subcritical) in a given channel section is determined by the ratio of the flow velocity (equation 6) to the critical velocity (equation 4).
The Standard Step Method (Chow, 1959), a finite-difference approximation to equation 5, is used to solve for depth as a function of distance in channels of variable width. The method requires a known control (boundary) condition. For a given discharge, either a measured depth or critical conditions must be specified at some location. In increments of ∆x, calculations from this known control condition proceed upstream if the flow is subcritical and downstream if it is supercritical. Equations 4 and 5 are solved iteratively for the depth.
For the present analysis, changes in velocity (the measured parameter), are of more interest than changes in depth. Downstream-velocity variation, expressed as 1/u (∂u/∂x), is obtained from equation 5 and the derivative of equation 2,

This form of the gradually varied flow formula illustrates that velocity changes are influenced by the sign and magnitude of (1) the Froude number, F; (2) the downstream width variation, 1/b (∂b/∂x); and (3) the difference between channel slope and energy gradient (So – Sf ). Relations between these factors are summarized in a graph of the width term vs. the slope term of equation 7 (Fig. 3, discussed below). 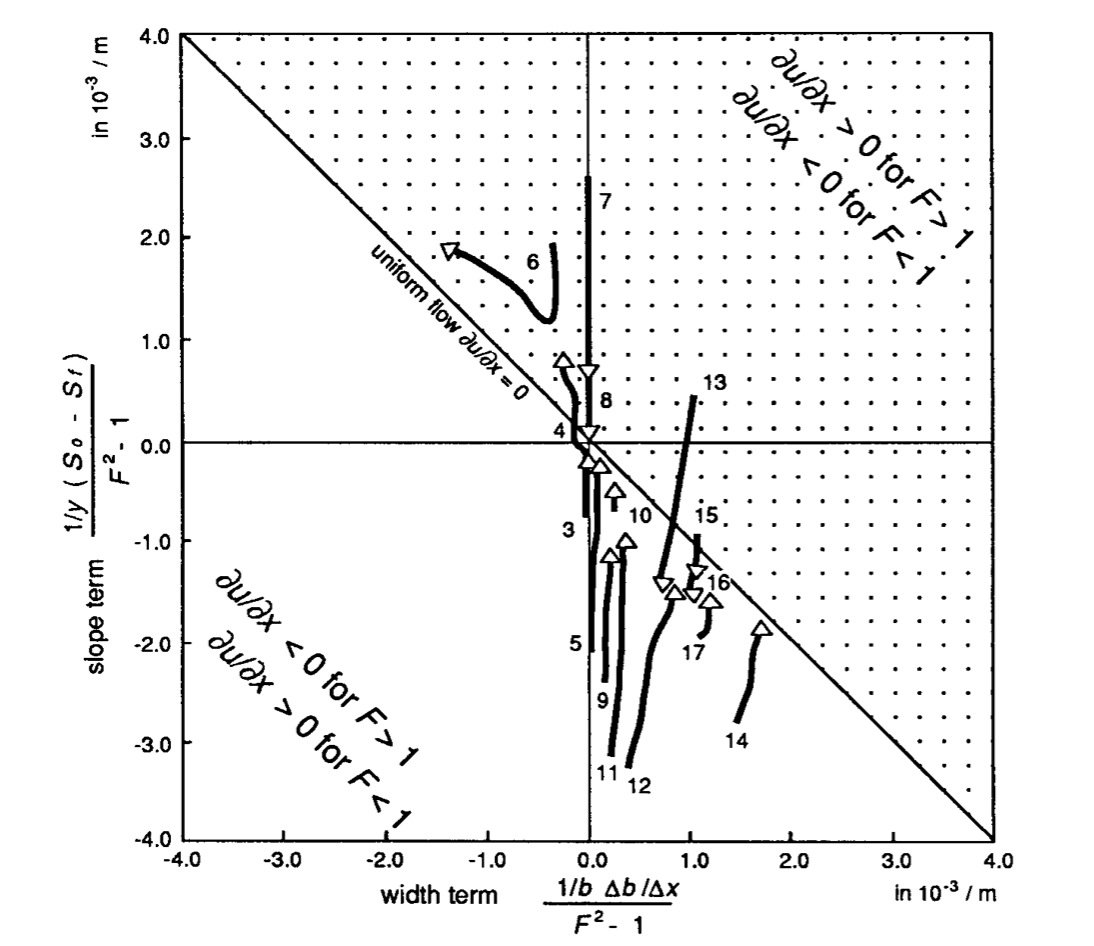 Figure 3. Trajectories of channel-width term vs. channel-slope term of equation 7. Variables defined in text. Discontinuities between trajectories reflect abrupt changes in channel slope, in some cases real and in others, an artifact of simplified geometry of constant slope reaches.

Our results demonstrate that the response of a pyroclastic flow to changes in channel geometry is complex, with substantial changes in flow velocity and flow regime occurring with changes in the terrain. Supercritical to subcritical transitions may be as important flow transformation phenomena as turbulent to laminar transitions discussed by Fisher (1983). The locations where flow rheology can be inferred, such as in deposits on the Pumice Plain (Wilson and Head, 1981), may not contain a record representative of the entire flow history.
The range of velocities from 5 to 30 m/s suggests that there could be varying transport capacities in the flow and that erosional and depositional patterns could be complicated. There are no known criteria for transport capacity in pyroclastic flows, but for comparison we note that water flowing at 10 m/s in the Colorado River is capable of moving boulders 1 m in diameter or larger. The estimated density in the pyroclastic flow is similar to that of water, and flow velocities were greater than 10 m/s for the entire steep section of the Stair Steps, where wall erosion and channel-bottom scour was documented by Rowley et al. (1981).
In pyroclastic-flow deposits, the velocity decrease through a hydraulic jump may be represented by an accumulation of large lithic clasts (Clark, 1984). Hydraulic jumps generated by slope inflections have been suggested as sources for lithic-rich units in pyroclastic flows at Laacher See (Freundt and Schmincke, 1985) and St. Kitts in the West Indies (Roobol et al., 1987). While no vertical sections of August 7 deposits near the Stair Steps have been described, Rowley et al. (1981) described lag deposits of coarse pumice from a June 12 flow which decelerated at the base of a preexisting phreatic pit. The flow variations described in this study should be considered when interpreting spatial relationships and facies in pyroclastic deposits.

A steep, narrow channel opening onto a wide plain is a common geometry for pyroclastic flows descending the flanks of volcanos. The success of our simple model in reproducing observed velocities suggests that channel geometry controls flow velocity and depth. Although an empirical coefficient n appears in our model, it is physically constrained as a measure of channel roughness and is not a free parameter arbitrarily varied to optimize the calculated velocity profile. Although hydraulic theory greatly simplifies the dynamics of a pyroclastic flow and does not address its material properties, it may be useful as a predictive tool. With only topographic data, and estimates of potential discharges and a Manning coefficient for the terrain, sites of erosion, deposition, and hazard potential on the channelized flanks of active volcanoes could be estimated.

This paper was originally published November 1991 in the Geological Society of America Journal "Geology". Abstract available at http://geology.gsapubs.org/content/19/11/1121.abstract

Let me know how fascinating this writing is!